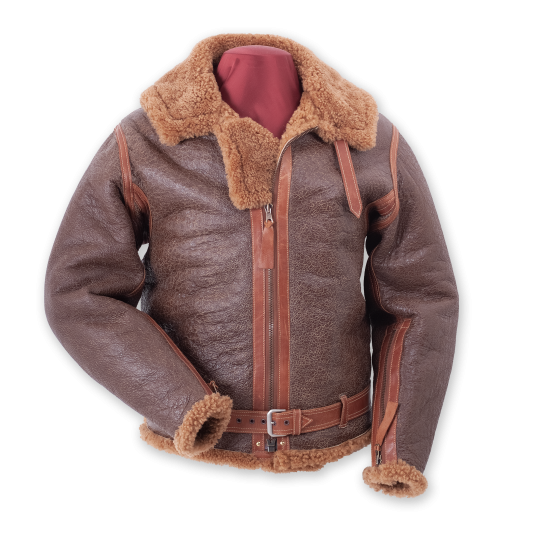 The most impressive aspect of this product, is not just it’s uncanny authenticity, but that it’s the most easy-wearing, soft, comfortable sheepskin flying jacket you’ll ever put on and will not want to take off.

The pre and early war jackets were manufactured with undivided one-piece body and sleeve panels. This was a somewhat extravagant way of producing the garment because each body panel needed an entire skin to cut if from. This meant a lot of the surrounding part of the skin was wasted.

However, from an aesthetic point of view, this method of construction made a very clean-line looking garment due to it having fewer seams. RAF jackets were only made this way in the pre, and early war period - in subsequent years the design had it’s full-piece panel construction subdivided into a greater number of panels to make it more economical to produce.

As collector items today, original RAF flying jackets are very desirable - particularly the earlier (full-piece panel) construction examples, not least because they are synonymous with the famous Battle of Britain. In the summer of 1940 (when this particular battle took place), only jackets made in the early configuration existed. So they are often referred to as ‘Battle of Britain’ jackets.

However, within the period of production of these ‘early spec’ jackets (mid 30s - 1940), there were also some other subtle distinctions between various contracts that were produced throughout those years. They were not necessarily intended, but nevertheless they existed. It was most probably due to skins being sourced from a multitude of suppliers in order to meet the demand, and as such skins from various breeds were procured without any emphasis on which ones could be used. There are dozens of different breeds of sheep, and the difference between the characteristics and nature of them is wide. They can rage from soft and silky, to tough and coarse.

It can be seen from original examples of RAF jackets, that some were made from a noticeably softer skin, with slightly lower pile fleece. These were largely made from a Merino type breed of sheepskin. This skin is well known for it’s softness and high quality texture, which is the version we have recreated here called The Fly Weight.

There were several manufacturers who produced RAF sheepskin flying jackets for the Air Ministry, and during the pre-war years they would often reveal their name and location on the garment label. It was only in later years and into the war that the names and places were absent, as they learned this could lead to the producer becoming a target of the enemy due to it being a producer of war materiel.

The Fly Weight model emulates the early style of RAF jacket commonly produced in the late 1930s. It is made from a Merino skin that has been custom-made to our specifications to accurately recreate the appearance, feel and texture of the originals, along with a classic commercial style neck label that was typical of that period.

This skin has been specially produced to have a ‘crazed’ appearance to the outer, and a fleece that has that typical nubbly texture that can been seen on originals. Other authentic details include:

One of the most impressive aspects of this product, is not just it’s uncanny authenticity, but that it’s the most easy-wearing, soft, comfortable sheepskin flying jacket you’ll ever put on and will not want to take off - you feel like you're on Cloud 9 in The Fly Weight!