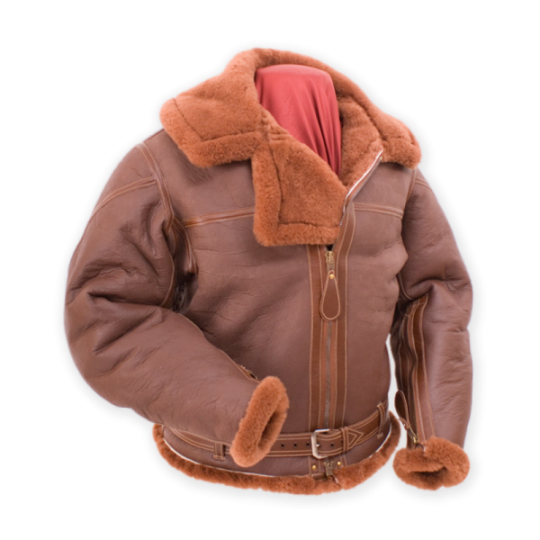 From experience learned in the First World War, the necessity for some form of garment with a high degree of insulation became evident. From this need finally emerged the design commonly known as the 'Irvin'. The first examples went into production in 1931.

Approved by the Air Ministry its production was contracted out to many manufacturers and not solely to the Irvin Airchute Company, as commonly believed. The pre-war jackets were manufactured with a somewhat extravagant use of the sheepskin material. They had undivided one-piece body panels requiring only the minimum of necessary seams. Although this facilitated easier assembly, it consumed much greater quantities of material.

With the coming of war and the demand for greater quantities of jackets, a more economic method of manufacture had to be devised. It was decided that the earlier pattern should be divided into smaller panels, thus saving material, but which resulted in the consequential increase in the number of seams.

Whilst these measures served the need for wartime economics, they do not detract from the present day value of these highly sought after flying jackets. Many have now found their way into the memorabilia collections and museums; no other garment depicts more readily the gallantry and selflessness of the airmen who wore them as the 'R.A.F. Sheepskin Flying Jacket'.

The model offered here is typical of that which was produced during the 1941/42 period. The over-riding prerequisites of quality and authenticity have been strictly adhered to throughout, presenting the most avid enthusiast with a jacket of unparalleled accuracy.