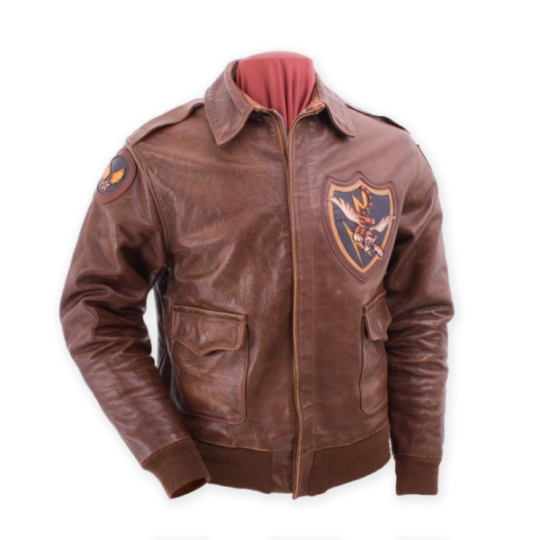 Add Insignia
Note: Jackets that are personalised with insignia, or that are Time Worn® (where Time Worn® is optional), are non-returnable
£1,599.99

Previously to that a small volunteer unit known as The American Volunteer Group (the AVG - also known as the FLYING TIGERS) had been hired by the Chinese government in their war against the Japanese. Headed by the tenacious Brigadier General Claire Lee Chenault the AVG soon gained notoriety with the Japanese for being a force to be reckoned with.

When the US entered the war proper the AVG were amalgamated into the 23rd Ftr Grp (which were part of the USAAF 14th Air Force), absorbing many of the battle-hardened AVG pilots in doing so, and thus becoming an even more formidable unit.

The 23rd Ftr Grp's combat record goes down in history as being one of the most illustrious In the US Army Force, creating Aces such as the great Don Lopez and David 'Tex' Hill.

Before returning to the United States in December 1945, the 23rd had flown 24,000 combat sorties, requiring more than 53,000 flying hours, and at a cost of 110 aircraft lost in aerial combat, 90 shot down by surface defenses, and 28 bombed while on the ground. it was credited with destroying:

Our representation of a 23rd Ftr Grp jacket is based upon our Rough Wear Clothing Company, 1401 contract, Type A-2. The RW 1401 is a suitable candidate for this unit having been produced in the early part of 1942 and thus being available from when the 23rd was first activated.

(For more information and details of authenticity about this model please refer to this link:

We have then embellished the jacket with the appropriate insignia and markings of the unit in exquisitely hand-made layered leather patches:

We cannot emphasize enough the degree of detailing and quality in these jaw-dropping patches. Each piece is hand-cut and then sewn using minute but accurate stitching - the 23rd patch alone comprises no less than 40 pieces of leather in it's construction.

The garment is finally given our TimeWorn® process with even greater detailing than that of our regular finish, which renders the garment with a stunning vintage patina that is unbelievably convincing.

The product is delivered to you in a custom-made, metal-edge, hard-card box to treasure forever, and eventually hand-down to your next generation - just like an original.