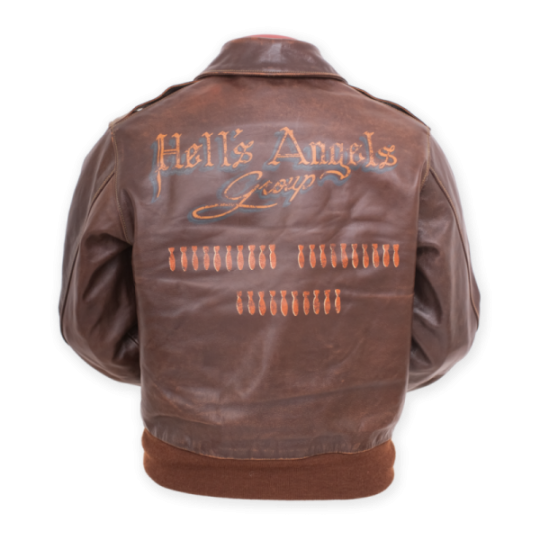 Continue Reading
A-2 HELLS AN

Arriving at Molesworth on the 9th September 1942, the 303rd were assigned to the 8th Air Force, and were one of the first American bomber groups to arrive in England to join the British in the bombing campaign against Germany. They went on to fly more combat missions than any other bomber group in the USAAF, 364 in total, and take part in some of the bloodiest sorties of the war; targets such as the ball-bearing plants at Schweinfurt; shipbuilding yards at Bremen; synthetic rubber plant at Huls; the aircraft engine factories of Hamburg; the industrial quarter of Frankfurt and the marshalling yards at Le Mans were among the destinations where they flew to hell and back, and which earned them a much deserved Distinguished Unit Citation.

Proud of their group's reputation some airmen had their jackets painted on the back with various motifs and slogans. In the case of the 303rd, it was Hell's Angels Group. Quite often this would be accompanied by a series of bombs which depicted the number of missions flown.

As the 2nd addition to the Elite Units range we are extremely proud to offer an incredible recreation of an original Hell's Angels Group back-painted A-2 of the famous 303rd Bombardment Group. 1st Lt Constantine J. Duros was a Bombardier in the 360th Bombardment Squadron who completed a tour, flying 29 missions in total, and had his Rough Wear 27752 A-2 jacket painted in such a way.

Utilising our reproduction of this very same model A-2 (Click here to see the product page of this model jacket), we have recreated an exact replica of the Duros A-2.

As you will see from the images in the photo gallery the back-painting is superbly rendered, and has been worked in order to capture the essence of a time-aged original. To the front left breast is sewn a superb hand-embroidered Hell's Angels Group squadron patch (360th B.Sqdn), which is a perfect recreation of a theatre-made original.

The garment is finally given our TimeWorn® process, which renders it with a stunning vintage patina that is unbelievably convincing. Both the painting and the patch melt into the leather as though they have been seated there for decades, giving you the ultimate in a recreation of a true vintage icon.

Additionally, to the right collar clasp, is a perfect reproduction of an Acme Thunderer Air Ministry whistle; a detail which is often found on original USAAF flight jackets which were used by airmen who were based in England. These are made of nickel plated solid brass, and then also TimeWorn to convincingly match the patina of the jacket.