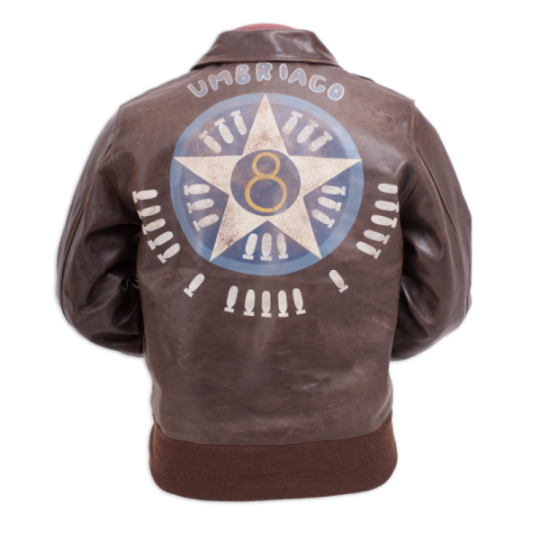 POCKET LABEL
Perfect reproduction of the original - printed both sides

One such aircraft was a B-24 Liberator bomber known as 'UMBRIAGO', of the 489th Bombardment Group. 'Umbriago' was a word of the time during the early 40's, having been made famous by comedian/entertainer Jimmy Durante who had a hit with a song of the same name. Umbriago was Jimmy's jovial fictitious side-kick. It was from this good-luck character that inspiration was taken for the name of the aircraft.

Assigned to the 8th Air Force in the Spring of 1944, and stationed at RAF Halesworth, England, the 489th arrived at the very height of the air offensive against Germany, and the UMBRIAGO was right there in the thick of it.

Taking part in a multitude of bombing missions throughout most of 1944 (which included several just prior to, and during D-Day - collecting a Medal of Honor on the way), the 489th was finally relieved of assignment on the 29th November 1944. However, the UMBRIAGO was re-assigned to the 446th Bomb Group where she continued to deliver her payloads to the enemy until the 27th December that same year. Misfortune befell her at this point when she crashed in fog whilst taking off at Bungay-Flixton airfield, bringing her remarkable wartime career to an end, which unfortunately included the pilot - fortuitously, the rest of the crew survived.

Just prior to leaving the 489th, the entire crew of the UMBRIAGO did what many crews of the US Army Air Forces did when completing a tour - they had the backs of their A-2 flight jackets decorated with a painting of the name of their aircraft to celebrate their achievement. In this case the design incorporated a yellow '8' (for 8th Air Force) centred within the US white star, which in turn is mounted upon a blue disc. A bomb for each mission flown was painted in white, and fanned around the disc in a symmetrical fashion, with the word 'UMBRIAGO' above. That was nearly 70 years ago - incredibly, one of those eight jackets, that of Navigator Lt Milton R. Johnson, has survived. His original Star Sportswear, back-painted A-2 has made it through the years to still tell the tale of the famous UMBRIAGO.

It is Lt Johnson's back-painted A-2 that is illustrated and recreated here as part of the Elite Units series. Utilising our original-maker Star Sportswear A-2 (the same maker as Milton's original) the UMBRIAGO artwork is meticulously hand-painted, matching the dimensions, colours and texture of the original to perfection. This in turn has been hand-worked to capture the essence of a time-aged original, offering one of the most striking back-painted A-2s of that era. The painted Navigator wings, which were also a feature of Milton's A-2, are accurately depicted on the front left breast.

The garment is finally given our TimeWorn® process, which renders it with a stunning vintage patina that is unbelievably convincing, giving you the ultimate in a recreation of a true vintage icon.

Attached to the right collar clasp, is a perfect reproduction of an Acme Thunderer Air Ministry whistle - a detail which is often found on original USAAF flight jackets which were used by airmen who were based in England. These are made of nickel plated solid brass, and then also TimeWorn® to convincingly match the patina of the jacket.