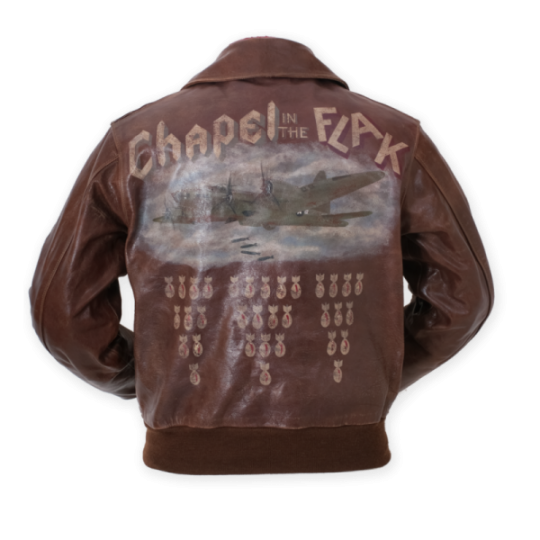 If there was ever a bomber group that epitomised the Eighth Air Forces strategic bombing campaign in Europe, it was the 100th Bombardment Group (H).

If there was ever a bomber group that epitomised the Eighth Air Forces strategic bombing campaign in Europe, it was the 100th Bombardment Group (H).

Earning the nickname ‘The Bloody Hundredth’ (because of their high losses), the group flew the famous Boeing B-17 heavy bomber aircraft out of USAAF Station 139, Thorpe Abbots in Norfolk England from June ’43 until the end of the war.

During that combat operations period, the group received two Presidential Unit Citations and the French Croix de Guerre with Palm for their outstanding efforts and bravery.

A résumé of their combat statistics:

Number of men killed or missing in action: 785

The 100th was made up of 4 squadrons, one of which was the 418th, and within that squadron flew the B-17 named ‘Chapel in the Flak’. There is no doubt as to where the inspiration came for that name, as to be a USAAF bomber crewman in Europe in WWII was one of the most dangerous and unbelievably stressful jobs within the armed forces. Naturally any kind of combat situation is dangerous, but hanging in the air inside a metal tube whilst flying straight and level for several hours over enemy territory with ground defences and fighter aircraft trying to shoot you down is psychological torture akin to Russian Roulettte.

The crew of this aircraft, like many crews, had a camaraderie for each other that was forged by their shared experiences in battle. Proud of their aircraft and efforts they would often paint the backs of their jackets with slogans and motifs, which usually included recording the number of missions they had survived by painting a bomb for each one.

Such was the case for the men of ‘Chapel in the Flak’, and we are delighted to be able to offer a superb, exact recreation from a wartime original that has the blessing of the 100th Bomb Group Foundation Inc. As part of a collaboration with this foundation, who own the trademark CENTURY BOMBERS®, we offer this officially licensed product which pays respect and homage to this time honoured unit.

Recreated from examples of original jackets worn by the Chapel in the Flak crew using our newly developed veg-tanned Vintage War Horse® Horsehide, this offering is going to get you salivating. The character and handle of the leather is to die for as it exhibits all the craggy character that is so often seen on vintage originals. The closeup images in the photo gallery show you exactly the kind of character you can expect. The hand painted recreation of the artwork is meticulously done and is so authentic it’s virtually indistinguishable from the original, capturing the correct colours and muted tones that only originals have - there is only one way to describe it: Outstanding!

We have also gone the extra mile to make this piece truly exceptional and fitted a rare original dead stock M-42 Talon zip for the closure.

On top of this the garment is given a subtle TimeWorn®️ finish to render a recreation of unparalleled authenticity. Due to the intense hand-finished nature of making such a product you can rest assured, by owning one of these, you will have something truly special as we are only able to produce a handful of these special pieces each year. It is essentially art-in-clothing that one can wear as well as hang for display, and is a homage and maintenance of a memory of the incredibly brave airmen who put their lives on the line countless times so we may all have better lives today.

Visit the 100th Bomb Group Foundation at 100thbg.com for more in-depth information on this gallant unit.