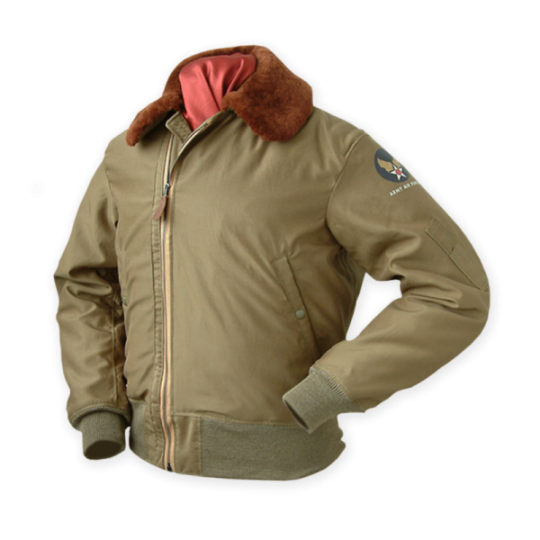 As early as 1942, the Materiel Division of the US Army Air Forces had been seeking an alternative material to Sheepskin for producing flight suits. Standardised on the 7th April 1944 the B-15 was the second in a new generation of cloth-shell, alpaca-lined garments.

Add Insignia
Note: Jackets that are personalised with insignia, or that are Time Worn® (where Time Worn® is optional), are non-returnable
£899.99

As early as 1942, the Materiel Division of the US Army Air Forces had been seeking an alternative material to Sheepskin for producing flight suits. Standardised on the 7th April 1944 the B-15 was the second in a new generation of cloth-shell, alpaca-lined garments.

However, a very limited number of B-15's had their shell made from a unique cloth constructed of a cotton/rayon mix.

In May of 1942 a company by the name of Hirsch-Werner Inc contacted the Army Air Corp offering a new, specially developed cloth, they called: 'EndZone Twill'. It had been utilized in the manufacture of football pants, because of its extreme durability and strength. Consequently, it was first used on the B-10 flight jacket, as trim for the underarm gussets and pocket linings.

The Rough Wear® Clothing Co, along with a few other manufacturers, received contracts for B-15's made entirely of EndZone Twill. It is not known why only a few contracts were issued with this spec, but most probably it was due to the relatively high cost of the fabric, that prevented greater use of it.

As previously mentioned, EndZone Twill is constructed from cotton and rayon mix - 100% cotton in the warp, and 100% rayon in the weft, giving the fabric a unique appearance of being shiny one side, and dull on the other. This is an extremely dense cloth which looks, feels and wears magnificently.

Our offering is a fabulous reproduction of the Rough Wear® B-15 - contract 6338AF - made from the famous EndZone Twill. At tremendous cost, and long period of development, we have had this amazing cloth custom-made exclusively for this product.