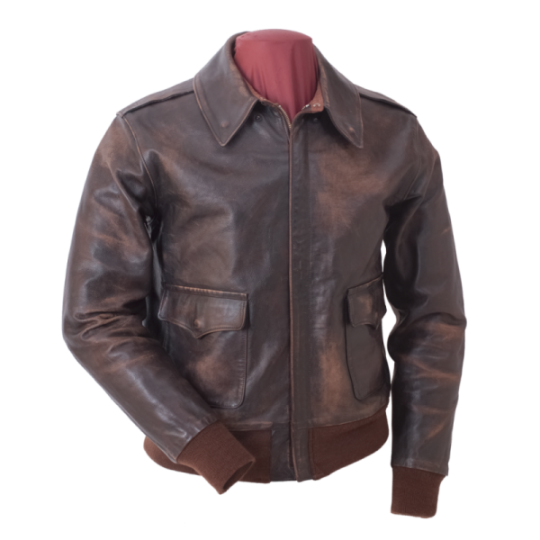 Reissue A-2s are jackets that went back into quartermasters inventory after active service and subsequently went through a refurbishment process to give them further serviceable life. This refurbishment would include such things as replacement lining, knit cuffs/waistband, zip, and crucially, a re-coating of the leather shell with a very dark brown polyacrylate lacquer to give the garment a new uniform appearance. This lacquer was applied by hand, literally with a brush.

V. HILTS SPEC
By selecting the V. HILTS spec insignia option below one gets their jacket decorated in the insignia combination as that seen in the movie - The Great Escape. Click on the jacket picture opposite to see the full picture gallery of this product and the Virgil Hilts insignia package.

Reissue A-2s are jackets that went back into quartermasters inventory after active service and subsequently went through a refurbishment process to give them further serviceable life. This refurbishment would include such things as replacement lining, knit cuffs/waistband, zip, and crucially, a re-coating of the leather shell with a very dark brown polyacrylate lacquer to give the garment a new uniform appearance. This lacquer was applied by hand, literally with a brush.

Characteristics of this re-coating process would be that certain hard-to-get-at areas, such as down inside the pockets, back of the windflap etc, were not reached. The finish was often unevenly applied, giving rise to mottled shading and varied texture.

As the garments went back into service the painted coating proved not to be so permanent as was originally envisaged. The finish would wear off in irregular patterns bearing the lighter shade of the nap beneath giving a distinct contrast between those areas, and where the coating remained. All of this however is what has given these garments their latter-day vintage appeal.

Indeed, nowhere was this look more immortalised than the jacket worn by Steve McQueen as Capt. Virgil Hilts in the movie The Great Escape. McQueen’s jacket was one such original re-issue A-2.

After careful analysis of many original stills from the movie we have been able to confidently identify the jacket he wore as one made by the Rough Wear® Clothing Company, under contract number 16159. So our re-issue A-2 is made as this model. As part of the reissue process that his jacket underwent, it can be seen that the original zip, which would have most certainly been a Talon M-39 (with rectangular puller), has been replaced with a Talon M-42 with bell-shaped puller - a detail replicated on our product.

We have recreated this model in the most discerning method possible, by literally repeating the steps of production right through to the reissue finish, to bring you a garment of stunning vintage authenticity. First we produce the garment as a factory fresh original maker Rough Wear® 16159, which is made in an aniline dyed, Havana shade, veg-tanned horsehide. We then re-coat the garment with the correct shade of dark brown lacquer (just as they did at the quartermasters - by hand, with a brush), after which the garment is put through an extensive and specialised TimeWorn® process to positively re-create the high-contrast distressed wear affect of a classic vintage original. This all requires a tremendous amount of hand-done work, but is the only way this standard of authenticity can be achieved.

In accordance with AAF regulations of that time, re-issue A-2s had a mandatory Army Air Forces decal applied to the shoulder, as well as a stamp to the lining. These stamps were generally randomly positioned somewhere on the back panel no doubt due to haste, not clinically centred and perfect, so our recreation is done exactly the same way.

This garment is presented first and foremost as a plain re-issue A-2, so it comes in standard form without any insignia (apart from the mandatory shoulder decal). However, one can order the jacket with whatever extra insignia one likes from our inventory, and of course in ‘V. HILTS spec’, by selecting that option at the bottom of this page.

By selecting the V. HILTS spec insignia option below one gets their jacket decorated in the insignia combination as that seen in the movie - The Great Escape.

V. HILTS name and serial number stencilled in the lining