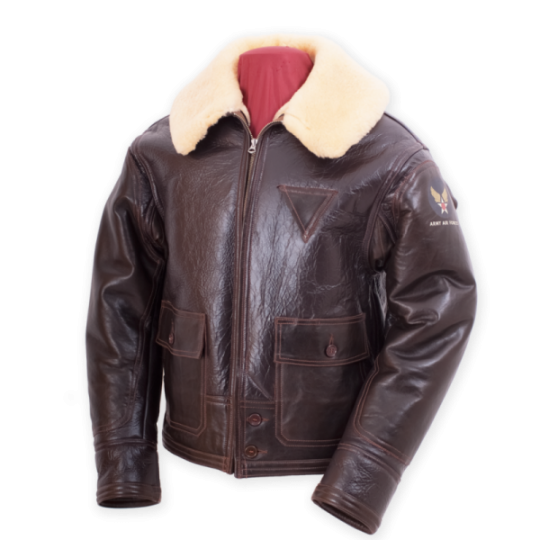 Standardised on May 17th 1943 the ANJ-4 was the last model flight jacket to be made from sheepskin. As a replacement to the long-standing B-3 design, it did not enjoy such a long period of service; in less than a year it would itself be superseded by a new generation of pile-lined, fabric flight jackets.

Add Insignia
Note: Jackets that are personalised with insignia, or that are Time Worn® (where Time Worn® is optional), are non-returnable
£1,799.99

Standardised on May 17th 1943 the ANJ-4 was the last model flight jacket to be made from sheepskin. As a replacement to the long-standing B-3 design, it did not enjoy such a long period of service; in less than a year it would itself be superseded by a new generation of pile-lined, fabric flight jackets.

However, being the last in the evolutionary line of jackets made from animal skin it benefited in its design from all that had been learned from many years of development. They combined durability with comfort and the result was a flight jacket of outstanding quality.

The Poughkeepsie Leather Coat Co. of New York was one of the companies that was awarded a contract for producing this style, and it is this specific model that we offer here as an extremely accurate recreation of their particular ‘house style’.

Across it’s short time of production the ANJ-4 was produced in 3 slightly different versions, the 3rd, as per this model, was produced with a shortened zip, which ended 3 inches or so above the bottom edge of the garment. The lower 3 inches had two buttons. This was to aid sitting in the garment; by undoing the buttons the bottom of the jacket could be allowed to flare, thus making it more comfortable to sit in. It also had the addition of a triangular piece of leather sewn to the left breast - this was clipping the crocodile clip of the oxygen mask onto rather than let is swing about, and to prevent the airmen from just clipping it to the front edge of the garment where the teeth of clip would puncture the soft shearling skin.

This particular Poughkeepsie model differed in another way though like no other make did, and that was the use of capeskin for the leather reinforcements instead of cow or horse hide. Along with a slightly lower pile fleece it made the garment altogether less cumbersome than the thicker pile, hide covered versions. It also had sheepskin cuffs as opposed to hide, again making the garment lighter and easier to wear.

We have recreated this model with fastidious endeavour, making sure every unique detail is matched to the original, to bring you one of the grandest sheepskin flight jackets ever designed.