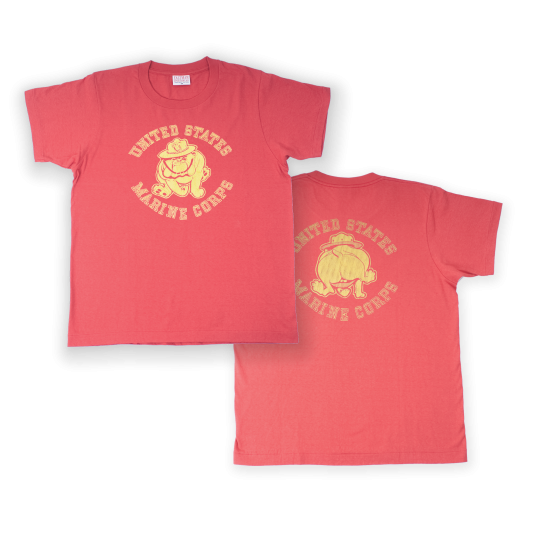 Nothing says Marine Corp more than the unmistakable shades of Scarlet and Gold.

Nothing says Marine Corp more than the unmistakable shades of Scarlet and Gold. Although the Marines were formed 150 years earlier, it wasn’t until the 18th April 1925 that the service officially adopted these shades under Marine Corp Order Number 4.

The print (front and back) is taken directly from the original of the famous ‘Sgt. Major Jiggs’ Bulldog logo of the USMC as it appeared on tees in the 1960s. It is replicated extremely precisely both in design, colour and method of printing, which is known as ‘broken rubber’ method.

Sgt. Major Jiggs was the Corps’ first Mascot and was an actual real life Bulldog who was adopted by the commander of the Marine Corps and two-time recipient of the Medal of Honor, Brig. Gen. Smedley D. Butler, in 1921.

Made entirely in Japan, by the best in the business, and recreated from a 1960s vintage original, this is the 4th in our series of authentic military Tees.

Manufactured with a special thread called ‘Raffy’, which is a combination of American Supima cotton, Egyptian cotton and Turfan cotton, it replicates the look and feel of vintage fabric. These cottons all have different length staples, giving the thread a distintive texture. This is then woven on rare vintage circular knitting machines, so the body is a complete tube with no side seam, known as ‘body-size’ - just like the originals.

Finally, the dying and sewing construction is impeccably matched to the original, rendering a recreation that is second-to-none.