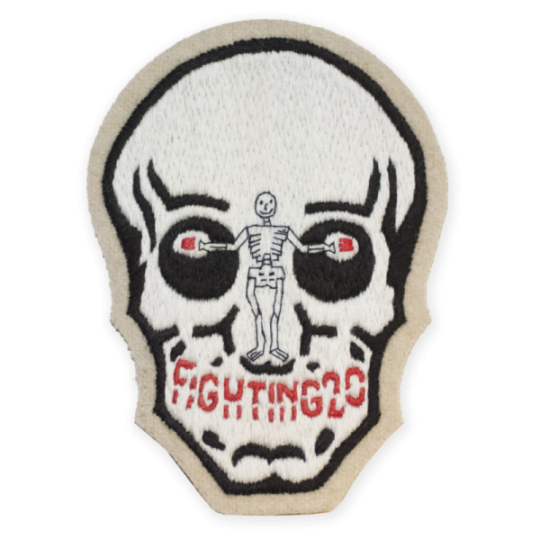 VF-20 was established on 15 October 1943 as part of Air Group 20 stationed at NAS San Diego, California.

VF-20 was established on 15 October 1943 as part of Air Group 20 stationed at NAS San Diego, California.

The motto of the squadron was 'Trip Or Die', referring to the cables the fighter's tailhook had to 'trip' to make a landing.

- VF-20 "Jokers" was established on 15 October 1943 as part of Air Group 20 stationed at NAS San Diego, California. The squadron was composed of numerous newly winged Naval Aviators along with a few combat veterans. On 16 April 1944 the squadron departed NAS Alameda aboard USS Essex en route to Hawaii for four months of operational training prior to its first combat tour.

- On 31 August 1944, the squadron’s first combat action came as combat strikes were flown from USS Enterprise (CV-6) in squadron F6F Hellcats against the Bonin Islands. Strikes followed to Yap and Palau Islands, Peleliu Island, Okinawa, Formosa, Luzon, and Leyte. VF-20 was heavily involved in the initial invasion operations in the Philippines, including the epic Battle of Leyte Gulf from 24–25 October 1944. VF-20 aircraft struck elements of all three Japanese Task Forces which were converging on Leyte Gulf.

- On 14 December 1944, Lieutenant (jg) Douglas Baker was on a strike mission against Clark Field on Luzon when he encountered Japanese fighter opposition. During this engagement he destroyed four Japanese aircraft before being shot down by antiaircraft fire and lost in the action. This final action brought his air-to-air kills to 16, making him one of the high ranking aces for the Navy. Only eight other Navy pilots equaled or exceeded this record.

- From December 1944 to January 1945, VF-20 engaged in another series of combat actions, flying missions against targets on and around Luzon, Formosa, French Indochina (Vietnam), Hong Kong, the South China Sea, and Okinawa. Many of these operations were in support of the landings at Lingayen Gulf.

- As part of Admiral Halsey's Northern Strike Group, VF-20 assisted in sinking one of the world's largest battleships, the Japanese battleship Musashi (sister ship to the Yamato), and was given credit for partial kills on several Japanese cruisers and destroyers.

- 22 January 1945 was the last day of combat action for the squadron during World War II. In February 1945 the Jokers embarked on USS Kwajalein at Ulithi and departed for the United States, arriving there in the latter part of the month.

- During WWII, eight VF-20 pilots became aces, 12 pilots received the Navy Cross and 22 received the Silver Star. VF-20 was credited with the destruction of over 15 ships and 407 aircraft, not counting the even greater number that were damaged but not destroyed. For their combat efforts the command was awarded the Presidential Unit Citation in 1944 and 1945, along with the Navy Unit Citation while aboard Enterprise.

- In April 1946, the squadron transitioned to the F8F Bearcat.